We don’t like to speak the truth about evil because we’re going to hurt somebody. Let me tell you, you are going to hurt somebody, but that Somebody is God. If you would rather hurt God than your neighbor, there is something wrong with your spirituality. It’s your obligation to speak the truth and everyone can either take it or leave it. But truth must be in us. We live in such poverty of the truth today.
- Mother Angelica

Come follow me at A Contemplative Catholic!
Posted by Karen at 1:53 PM No comments:

Month of the Holy Rosary


Yesterday afternoon, the kids and I watched a movie about the miracle at Fatima.  It was a children's video and was actually a VHS tape.  Anyway, it depicted the three little children who were involved in the miracle at Fatima and the mysteries that were revealed.  Lucia dos Santos, and her two cousins, Francisco and Jacinta, were out tending the sheep one day, when Our Lady visited them.  She told them to come back the 13th day of every month for 6 months.  They did it, but not without punishment from those who didn't believe them.

It was a great video to watch with the kids.  They were able to learn about why we should pray the Rosary every day.  I noticed a difference in my two younger children who usually get distracted and don't seem to "care" to say it.  But I think that after watching the video, they had a reason.

The month of October is when the Sun Danced.  October is the Month of the Holy Rosary.  Say your Rosary every day.  Sacrifice for the conversion of sinners and the consecration of Russia to Mary's Immaculate Heart.
Posted by Karen at 6:50 AM No comments: 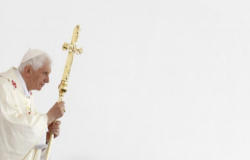 I was perusing my email this afternoon and happened upon this article.  It came at the perfect time for me because the kids and I were having a conversation about the Eucharist this morning during our morning prayers.  Hope you enjoy reading this as much as I did!
Posted by Karen at 2:58 PM No comments:

I have been reading a blog by a wonderful Catholic mom, Kate Wicker.  She blogs on several sites, including Faith and Family.  I think that is where I found her as a matter of fact.  She has such a wonderful way with words and she speaks from her heart.  I could really relate to her articles.

So she has taken her writing to a new level.  She is officially an author! Her very first book is called Weightless: Making Peace With Your Body.  I don't have it in my possession yet.  I'm trying to decide on the Kindle version, or the kind I can hold in my hand.  I really like to have the book to have and to hold, but Kindle is so convenient.  Oh the decisions!
Posted by Karen at 7:00 AM 2 comments: 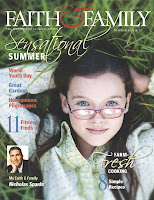 As some of you may know, I recently wrote about my disappointment of a post on one of my most favorite websites, Faith and Family Live! Since I wrote it, I have spoken to a very dear friend of mine and have gained some more insight into the controversy.

At the time that our now Pope Benedict XVI, voiced his opinion about the Harry Potter series, he was what they called a Prefect for the Congregation of the Doctrine of the Faith.  You can find information about that on this page.  What does that mean? Well, let's take this step-by-step.  I have a Catholic Dictionary, edited by Donald Attwater, 3rd edition, published by TAN books, that I took my definitions from.


That which is taught.  Christian doctrine ordinarily means that body of revealed and defined truth which a Catholic is bound to hold, but is often extended to include those teachings which are not of faith but are generally held and acted upon.  Occasionally the word indicates these last only, "the teachings of theologians," as distinct from "the faith taught by the Church."


Many thanks for your kind letter of February 20th and the informative book which you sent me in the same mail. It is good, that you enlighten people about Harry Potter, because those are subtle seductions, which act unnoticed and by this deeply distort Christianity in the soul, before it can grow properly.

While Cardinal Ratzinger did not put out an official statement about the books, he DID express this opinion, from the position of Prefect for the Congregation of the Doctrine of the Faith.  That is an opinion I deeply respect.

If you needed legal advice, would you go to a lawyer, or a cashier at the local Seven Eleven?

So, am I going to treat F&F as severely as I was going to when I first saw this headline? Still not sure.  One of the editors did get on the thread and explain a little.  I understand why they allowed this, because this is not OFFICIAL teaching of the Church.  I do however believe that a site like that should be making sure our youth are protected from any, ANY, temptation that might take us further from God.  I will end this with a quote from the Catechism.


1853: Sins can be distinguished according to their objects, as can every human act; or according to the virtues they oppose, by excess or defect; or according to the commandments they violate.  They can also be classed according to whether they concern God, neighbor, or oneself; they can be divided into spiritual and carnal sins, or again as sins in thought, word, deed, or omission.  The root of sin is in the heart of man, in his free will, according to the teaching of the Lord: “For out of the heart come evil thoughts, murder, adultery, fornication, theft, false witness, slander.  These are what defile a man.”  But in the heart also resides charity, the source of the good and pure works, which sin wounds.

Disappointed in Faith and Family

I recently came across an article on the website, Faith and Family Live! I was tremendously disappointed that they would allow this article to be on their site, promoting a book series that the Pope has clearly denounced as good Catholic reading, Harry Potter.

While I have not read the books, I do not ever intend to.  The Devil is very sly.  He can sneak into our heads and hearts and we could not even notice.  Our children are even more at risk than we are.  They are vulnerable and still being molded to be soldiers for God.  We have a responsibility to keep them on that path until they have all the spiritual weapons they need to lead their own battle against evil.

I am extremely disappointed that Faith and Family Live! allowed this writer to put this on a Catholic site.  I will see what comments follow my own before I remove them from my blog.  As it stands now, I will not be promoting them.
Posted by Karen at 2:29 PM 11 comments:

Making Music Praying Twice is this wonderful Catholic music program that is easy to integrate into any homeschooling curriculum.  The music selected goes by the liturgical year.  The songs are super fun and very catchy.  My kids can be found singing the songs when they are playing and then I find myself singing them too!
Posted by Karen at 6:39 AM No comments:

Mother Angelica's Private and Pithy Lessons from the Scriptures

Fr. Frank A. Pavone's Ending Abortion, Not Just Fighting It